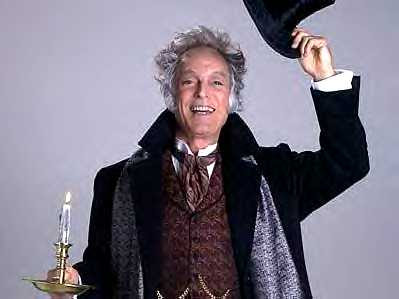 'Tis the season for cliches. It is the time of year when we spout overused sayings promoting feelings that should permeate year-round. Yet for some reason only around the holidays do we recall stories of the perils of loneliness and claim to make an effort to increase general goodwill.

Or is it all grandstanding?

Do we really believe what we are saying? "Peace on Earth"? "Goodwill towards Man"? "God bless us, everyone"? Unfortunately, I think it's all a bunch of malarkey.

We don't really want peace on Earth, do we? Do you realize how many people would be out of a job if everyone on Earth instantly got along? We wouldn't have threats to our person, to our resources, or to our nation. That means no Army, Navy, Air Force, or Marines. No need for a Department of Defense either. Everyone knows war is good for business. Where would these people work if peace broke out tomorrow?

Nothing represents the hypocrisy of the holiday season more than Charles Dickens' A Christmas Carol. We all know the story: grumpy old loner transforms overnight into celebrated philanthropist. Nice, neat, and packaged for our consumption.

According to the Blogger News Network, last year the Chicago Sun-Times claimed that Dickens' protagonist, Ebenezer Scrooge, was at first some sort of evil early Republican monster. This of course, set off the political blogosphere, with each claiming that the Scrooge of the end of the story represented their point of view. Because for whatever reason no one wants to be associated with the early Scrooge character.

The problem is that Scrooge is misunderstood. In defense of the Chicago Sun-Times, Scrooge was absolutely a social conservative. He worked within the system and succeeded. He saw nothing wrong with the socio-economic system as it was. The system didn't need changing, the people in it needed to change. That's the definition of conservativism.

Early in the book, Dickens portrays Scrooge as a miser, unwilling to put another piece of coal on the fire. But, as we know now, burning coal is bad for the environment. Scrooge was merely ahead of his time in his attempt to minimize the use of unrenewable resources.

Dickens also depicts Scrooge's desire to succeed as a bad thing. Today we would call him a workaholic. In a world where people are pulling Ponzi schemes to get rich quick, is working hard really such a bad thing? What Dickens doesn't mention is that Scrooge was honest. As far we know, he made his own money and never swindled anyone. Yet he is looked down upon.

Third and most importantly, Scrooge stayed within his limits. Since the days of Dickens' England, people have been bombarded with industrialized manufacturing. This uber-production is only now beginning to slow down. In its wake, we have millions owing credit companies and a trillion dollar national debt. My guess is that Scrooge never bought anything on credit, nor did he have outstanding debt. He was recession-proof, which in today's society is quite enviable.

So why shouldn't we emulate Ebenezer Scrooge? Remember, we are told not to be Scrooge-like by the same machine that tells us to buy more cars and eat more casseroles. The same machine that publishes Dickens's works every year and broadcasts his story between commercials on cable TV.

This year, fight the power. Stay real year-round. Embrace your inner Ebenezer and be like Scrooge.
Posted by Jordi at 8:08 PM