A Journey to Memphis and the Crossroads: Part 6: Falling down on my knees 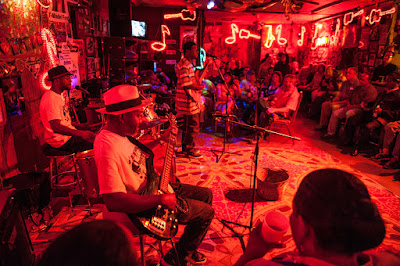 I promise this the last post about my vacation, especially considering I have been back home for three weeks. (I am really milking this, aren't I? To be perfectly honest, I've been really busy with some personal issues and this is ideal filler, given you guys are actually reading it.)

Anyway, after visiting Memphis I drove an hour and a half down Highway 61 to legendary Clarksdale, Mississippi, birthplace of the blues and the place where Robert Johnson supposedly made his deal with the Devil. Unfortunately, modern times have changed the landscape of Highway 61, as it is now several miles east of its original route. The real legendary crossroads is now the intersection of Hwy 49 and Hwy 161, which, as I was surprised to learn, is a rather busy intersection. I'm not sure how ol' Robert Johnson could have negotiated with the Devil without being seen; it's definitely not at all like the crossroads in the Ralph Macchio movie.

(By the way, there is an amazing BBQ joint called Abe's at the crossroads. According to the Abe's menu, it is very possible Robert Johnson might just have been munching on some BBQ when the Devil arrived. Being that Johnson made his deal in the early to mid-1930's and Abe's has been there since the 20's, their claim might be true. Although, to be perfectly honest, I don't know why the Devil would concern himself with something as useless as a soul when there is tasty BBQ in the area. The Devil works in mysterious ways, I guess.)

While in Clarksdale, I caught all the high point tourist places: the Delta Blues Museum, the Ground Zero Blues Club, Red's Juke Joint, and I even stayed at the world famous Riverside Inn. All of these are highly recommended not only for blues fans, but for anyone who wants to get away from the hustle and bustle of the city life and go to a place more simple, a place more quiet, and a place where you can kick back, grab some BBQ and a sweet tea, and listen to some good ol' American music the way it's supposed to be played: with heart, with feeling, and from the soul.
Posted by Jordi at 5:15 PM