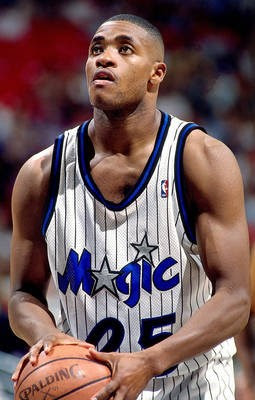 Last weekend I had the pleasure of meeting Whit Watson of Sun Sports/Fox Sports Florida (check out his blog here). Of course, being that he is a sports reporter and I consider myself a sports fan/occasional sports blogger, and being that we are both in Florida and have been for several years, we started talking about Florida sports teams. Shocking, I know.

Included in our vast Florida sports conversation was a discussion on the Orlando Magic (odd, especially considering we had just both left the Rays-Blue Jays game.). For those who are familiar with Whit's work, he was a television producer and radio reporter for the Orlando Magic from 1993 through 1997. Now, in his capacity with Sun Sports/Fox Sports Florida, Whit hosts Magic broadcasts and reports from Magic games. Needless to say, he knows his Magic basketball.

Eventually our conversation drifted from the current Magic team to the 1994-1995 Eastern Conference Championship team (aka "the team that lost to the Houston Rockets in the 1995 NBA Finals"). On the subject of this Magic team, Whit said something I could hardly believe. He asserted that during the 1994-1995 season Magic guard Nick Anderson and small forward Dennis Scott were among the top five in their respective positions.

(Actually, his complete assertion was that the Magic had top five players at every position. I didn't argue Shaq, Penny Hardaway, and Horace Grant.)

I've always thought Nick Anderson and Dennis Scott were good, but top five at their position in 94-95? Since I put up a bit of a challenge to his claim, Whit sort of conceded Dennis Scott, but challenged me to write a post and prove him either right or wrong on Anderson. Ok ....

First and foremost, let's look at Anderson's stats in 1994-1995. (All stats acquired from Basketball-Reference.com.)

Ok, now let's look at some of the other quality shooting guards from that year.

(By the way, did you know Houston was actually only 16-18 during the 94-95 season after acquiring Drexler? I guess he didn't jell until the post-season.)

According to his Win Shares as a percentage of his team's wins, Anderson was at best fourth, less important to his team's success than Richmond, Drexler, and Miller, but better than Majerle and Starks (Starks is still one of my favorites though). Richmond was more of a scorer, responsible for more of the workload in Sacramento, and Drexler and Miller are two of the game's best at the position. Sure, Anderson's ranking takes full advantage of Jordan's "baseball experiment", but based on my crude analysis, I'm forced to agree with Whit Watson. Perhaps Anderson was a top five shooting guard during the 1994-95 season.

Email ThisBlogThis!Share to TwitterShare to FacebookShare to Pinterest
Labels: Sports

The fact that the case is even arguable is a testament to Nick Anderson. You are right, Dennis Scott is the bigger challenge to make the case...

Joe Dumars should be in the top five, for sure.