Rapper Paul Wall versus The Man 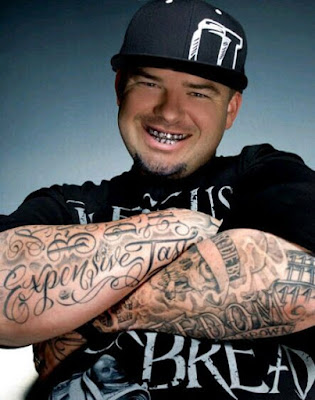 Last week, blogger Rafi Kam of the blog Oh Word wrote an awesome piece on rapper Ice Cube's classic hit "It Was a Good Day". To summarize, Rafi Kam said that although most people now take the song out of context, Ice Cube's classic isn't "really about some kick-ass day. The day singled out was remarkable because for once none of the usual bullshit associated with the terror of life in the hood reared its ugly head. No hassle from carjackers or police, no one killed, the narrator can’t believe he didn’t even have to shoot at somebody."

In other words, for one day in his life, Ice Cube didn't have to put up with The Man.

Below is the actual exchange between Paul Wall (aka @paulwallbaby) and The Man (aka @TheManInc) that occurred approximately 2AM, Aug 23rd, 2009.

@TheManInc: @paulwallbaby I mess up your good day and I don't roll right past you. I look in your direction as you run the intersection.

@paulwallbaby: @TheManInc no barkin from the dog. no smog

@TheManInc: @paulwallbaby I break up your fly dreams and flash the high beams. I look for the murder n close before 2AM so u can't get the fat burger.

@paulwallbaby: @TheManInc i gotta go cause i got me a drop top

@TheManInc: @paulwallbaby I stop you from going on the court and causing trouble and I especially prevent you from getting a triple double.

@paulwallbaby: @TheManInc what about getting a beep from kim

@TheManInc: @paulwallbaby I swoop in n get girls when u try to hook it up for l8r n I don't let u pick up girls u've been trying 2 get w since 12th grd

After this illustrious battle of wits and one-liners, Paul Wall decided to follow The Man's twitter feed to monitor any further broadcasts by The Man. Smart move.
Posted by Jordi at 9:12 PM