A Journey to Hatchet City Part 1: Carnival of Carnage 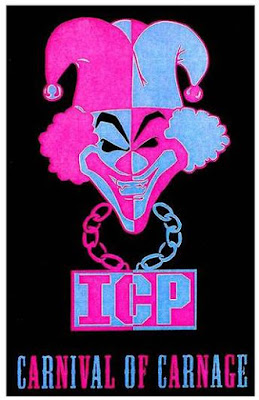 My first thought is that ICP was ahead of their time by already having a record label in a time when most rappers were beholden to draconian record executives. Smart move, and probably why they have been so successful in the underground.

Cool. A novelesque introduction. Sets up the concept of something different coming. A bit doomsday, but definitely piques interest. I will either be down or want to run away. Let's go.

Interesting beat on this instrumental. Their production is putting in work here. An assault on the ears like a Public Enemy track.

First track with lyrics. I like the mention of Violet J being mentally unstable - very Geto Boys or Heltah Skeltah "Therapy. Apparently, the Juggla is not to be messed with. Violet J has a very Ice Cube nursery rhyme flow if he was part of a very twisted circus.

This must be Shaggy as this is not the same voice as the first song. This flow is not as good. Like Easy-E's self-written songs compared to the songs Ice Cube wrote. Way too disjointed. The romantic segment had a better flow than the actual song. Eh.

ICP doesn't like southerners. Especially not racist southerners. This is Shaggy with a better flow than the previous song. The girl actually has a red neck. Ok, rhyming Conway Twitty with titty made me laugh. Halfway through the song the beat changes completely, as Shaggy goes off on racists. Then the song goes back to the laid back harmonica-driven beat with the weird chorus. Shock value with a hidden message.

Track 6: Wizard of the Hood

I think this is Violet J again. This is a nice flow on a nice club beat. Very MC Ren-style flow. This might be best song so far. I like the taking of the Wizard of Oz story and adapting it to the ICP story. But is it exploitative of low income areas? Do ICP consider themselves the twisted CNN of Detroit or are they using violence in low income areas for shock value?

Violet J again. Then a Kid Rock sex verse from before he got big. Then Shaggy. I like this beat.

This song has a very interesting beat - Funkadelic meets Halloween. I am getting used to the ICP style of lyrical braggadocio - murder, mayhem, and sex.

Track 9: Guts on the Ceiling

Another horror score beat. Not sure what the lyrics mean. His body has been blown up all over the city. Is there symbolism I am missing? Does this mean he lost his mental will for life due to low income difficulties? Maybe he lost a part of himself due to tragedies in different parts of Detroit. Or maybe I am thinking too much. Maybe this is just a twisted version of A Tribe Called Quest's song about losing their wallet in El Segundo.

Track 10: Never Had It Made

I like this beat. Shaggy raps about his struggles growing up. Of course, everything is exaggerated. Then Violet J gives his take on growing up in the hard streets of Detroit then going to jail then going to the electric chair. Then of course, he comes back and kills more people. Like Jason Voorhees if he was a John Wayne Gacy.

Violet J is on another killing spree. This time his target is rural southerners again. Shaggy echoes the notion with rhymes about killing rednecks. They don't say why they hate redneck/hillbillies besides the fact that they are bigots and racists although I don't think ICP is into deep socio-political rhymes. But it is interesting to hear white rappers go after other white people. Do ICP associate as white rappers?

This beat doesn't do it for me. Very disjointed. The lyrics are pretty similar to the shock value murder raps of other songs. "Insanity's grip will never let go, here is your chance to get a glimpse of the ghetto freak show" seems to sum up the entire album so far.

This beat is super cool. This song features ICP associates Jump Steady, Capital E, Nate the Mack, and Esham with Shaggy and Violet J. Jump Steady has a nice flow as does Capital E. This whole song is about bringing the experience of the inner city to the suburbs. Instead of changing the inner city as much hip-hop advocates, ICP and their boys advocate bringing tragedy to the upper class. Not sure if this is the most effective way to bring change to their predicament.

Interesting album. Better than I expected. Musically, some of the beats were good. Some were not. It does have a very raw, early '90s sound, which was expected. Structurally, ICP's rhyme styles were a bit simplistic, but many others were as well in the early 90s. I was impressed by the overall theme of the album. ICP's story as insane, tortured murderers on the loose in the suburbs and the south was consistent, although their backstory is a bit weak, similar to a low budget horror movie. From what I can guess, they were also the first group to run completely with what would be known as horrorcore, predating the Gravediggaz and Flatlinerz by a few years.

I don't think this album would have made me a big fan of their's had I heard it in 1992 but 28 years later, it's not bad. Let's see how or if ICP grows as rappers.