A Journey to Hatchet City Part 4: Shaggy 2 Dope F*ck Off 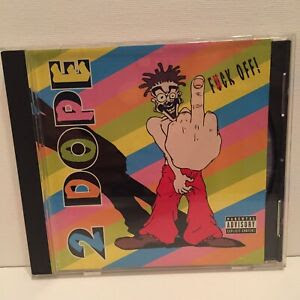 Continuing my journey through the long catalog of Psychopathic Records, today's listen is the first solo album from a member of the Insane Clown Posse: Shaggy 2 Dope's F*ck Off, released in 1994.

Besides being the first solo album, this album continues ICP's pattern of releasing EPs between their main "Joker Card" albums. Interesting strategy to keep fans interested.

Going in, I am not expecting much. Thus far on their albums, Shaggy 2 Dope has definitely been the weaker of the duo. Violent J was the better rapper on the first three albums. Let's see what Shaggy can do solo.

Starts with a nice upbeat hip-hop beat. Shaggy immediately jumps into anti-social rhymes. Shaggy doesn't care what people think about him and he will do what he wants. Braggadocio rhymes with an anthem feel. "I won't mix rap with rock'n'roll, like someone I know" - is that jab at Kid Rock, who was the Carnival of Carnage album? That was only the year prior.

Decent beat, but Shaggy 2 Dope doesn't sound as a smooth on this song. This song also has a weird reverb and audio fade. I am not digging this song. Content-wise, this song is carried by the chorus about being part of the Clown Luv crew - which is supposed to be a bridge of all the other sets. I wonder if ICP knew the growth potential of their following by this point in their careers.

Shaggy brags about being down with the carnival crew from the ghetto. This is the first mention of the carnival on this album. "Jokers and freaks in the night" - this song talks to the outsiders and gives them a sense of identity as well as talks about them getting social revenge on those who hold them down. Sort of a Tad Browning's "Freaks" vibe. Is this is a Walter Mitty dream type fantasy or are they calling for outsiders to bond? Or are they trying to tell outsiders that they aren't alone to boost their self-confidence? Outsider kids might migrate to this, thinking ICP has their back.

Back to the carnival vibe, this song starts with a carnie barker telling "normal" people to check out the circus of freaks. The song starts with a Violent J verse, about freaks and mutants being excluded from the popular parties. Interesting premise. Shaggy 2 Dope takes the second verse and flows like he did on the first song. I dig the "One of us" vibe of these last two songs. It celebrates differences.

This CD didn't make me wonder about the psycho-social-economic themes of the Joker card albums. It was on a "we are cool because we are different" vibe that was empowering. It also didn't contain any of the anti-southerner or racists themes of the full albums. Shaggy 2 Dope still isn't consistent lyrically, but overall, although short, this was a fun listen.
Posted by Jordi at 5:00 AM