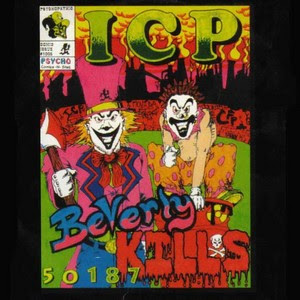 Welcome to part 2 of my trip into the Psychopathic Records discography. As a reminder, I am listening to the Insane Clown Posse and other Psychopathic releases for the first time ever and writing my initial opinions, attempting to give unbiased and honest reviews.

Today's journey takes us to 1993 and ICP's second release, Beverly Kills 50187. This is a short album with only 6 songs, although each song is 5 to 8 minutes long. Whereas Carnival of Carnage, ICP's first album, had a major label look, this album does not. It looks very bootleg.

First off, I like the references to the Warriors movie right in the start. This is before Puffy did the same on the "Flava in Ya Ear" remix. But instead of "Warriors", the voice calls for "Jugglers". This song has an NWA-like sound, especially Easy-E and MC Ren. ICP again goes right into the clown/carnival visuals.

This song has a lot of different changes and breaks in it, credit to the producer. The second part of the song deals with Shaggy 2 Dope's misadventures in taking out his anger on his classmates in high school. There is also the first mention of a Joker's Card, which I know is an ICP thing.

This song starts with someone waking up and then listening a positive message. Then it breaks into a list of tragic murders, saying that the media doesn't care unless they happen in the suburbs. The chorus emphasizes the social rift between the "safe" suburbs and the horrible, murderous inner city. Then Violent J discusses attacking the suburbs and America for their lack of concern. Definitely a song about social revolution and retribution. Not as carnival-clownish as some of their previous songs. This song has a message.

The track concludes with a freestyle full of joke raps by Violent J and Shaggy.

I like this beat. The content is a bit weird, about stalking women. Another mention of a Joker's Card. Is this supposed to be scary in a horror way or in a predatory way? Am I supposed to think the girl led him on and he is trying to get her attention. I am confused.

This song has a very disjointed beat. Almost like dubstep. Interesting mention of Zug Island, which I think is another group on Psychopathic Records. The song seems like a message to people ICP does not like and again to those who ignore the plight of the inner city.

Again, however, I am not sure if the Insane Clown Posse wants the inner city to change. There is no hope in their music. Similar to death metal with lyrics of war and destruction. Is there no other way? From ICP, I get the impression that there is not. Which is interesting for hip-hop, most of which aspires to change their environment - to use that anger for social change. ICP seems to embrace the negativity of the inner city as a permanent way of life. That's why I struggle with whether or not they are exploiting struggle of the inner city or not.

Then the song beat changes drastically to a funk-like vibe. I like how it tails off at the end of the song.

Another song with a horror movie meets funk type beat. Interesting sample of "swing, swing, swing, and chop, chop, chop" which Ice Cube used twice, once on 1991's Death Certificate and again on 1992's The Predator. Another song about wicked clowns unleashing chaos on their environment. While the beat is cool, not the biggest stretch lyrically.

The piano here is a nice touch. It gives a sense on somberness to the song. As does the slow delivery of lyrics. The lyrics have a surrealist feel, where the joker clown is ruling the world and things such as chocolate soup with a fruit loop exist. Another mention of the clowns coming to town to wreck havoc on the rich suburbs. Sounds like revolution again, but without the substance. Is the revolution supposed to be a mass riot, or lone wolves? I did this song musically, with the piano and the synthesizer, but again the content confuses me although did get the impression it was a dream sequence from the beginning and end skits. Is that how I am supposed to interpret all ICP songs? Are they all nightmarish dream sequences of people living in negative circumstances?

The album ends with a two minute return to the beat from The Stalker. Which as I mentioned, I thought was a very cool beat.

Overall, I thought this album was ok. There were some good beats, but the lyrics did not seem to progress at all from Carnival of Carnage and I am still trying to figure out ICP's purpose: are they revolutionaries trying spark the lower class to overthrow the upper class (like the movie Joker), are they chaos agents, are they a dream sequence, are they like Medieval artists depicting twisted Devils on Earth, or are they just good, old fashioned horror that attacks quiet, safe middle America (a la Freddy Krueger)?
Posted by Jordi at 5:30 AM