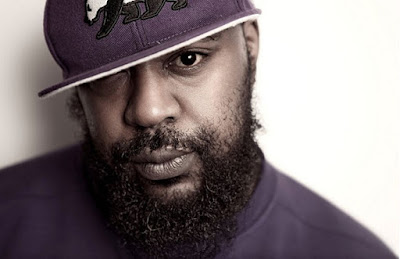 Rapper Sean Price passed away in his sleep Saturday morning. I was a fan of his for 20 years. I decided to write a little bit.

"Ruck is the luckiest fucker alive / I went from nothing to something a couple of times" - from the song W.M.D.

This is by far my favorite Sean Price lyric. As my career has been anything but linear, I've used messages from hip-hop as a way to keep me hustling, grinding, and moving forward. Few rappers inspired me like Sean Price. This is how I became a fan.

While watching "Yo! MTV Raps" in the mid-90s, I saw the video for "Wontime" by Smif'N'Wesson. The gritty, Shining-influenced Wontime introduced me to the boom-bap sounds of Duck Down Records and the Boot Camp Clik. I was a little late, as members of the label had released several albums prior to Smif'N'Wessons' release, but such was the plight of a suburban white kid relying on MTV for new music long before the days of the internet.

While the verses of Wontime were solid, the baritone refrain had me hooked. I eventually found out the deep chorus was done by fellow Duck Down members Ruck and Rock, aka Heltah Skeltah. Heltah Skeltah appeared on a few tracks on the Smif'N'Wesson album before releasing a single "Leflaur Leflah Eshkoshka" and their own album "Nocturnal" in 1996.

At the time, I thought Rock - he of the deep baritone - was the better of the two MCs. Ruck, who referred to himself occasionally by his given name Sean Price - was nice lyrically, but sounded somewhat generic. He didn't really grab me as a presence like Rock did.

I drifted from hip-hop for a few years and dove into rock and blues, but every once in a while I would play that Heltah Skeltah album. It was one of the few non-Wu-Tang or Def Squad albums I kept in regular rotation.

A few years later, I found Sean Price's first solo album "Monkey Barz" in a used CD bin. It had been a while and I was curious. What I heard wasn't like the Sean Price of old. This was a meaner, rougher, gruffer Sean Price. One who didn't need Rock's baritone voice to balance a song. Sean Price had gone back to the lab and come out a monster, a hip-hop version of blues legend Howlin' Wolf.

Lyrically, Monkey Barz was amazing. Using the theme of "The Brokest Rapper You Know", Sean Price rhymed about falling off after the first Heltah Skeltah album, hustling to survive, and getting back into music.

I've always had a soft spot for hustling lyrics. Stories of the struggle and trying to make it. I've never been a fan of the plush verses of Jay-Z, Kanye West, etc. I can't relate. But I because my career has had its ups and downs, can relate to the struggle; stories of working hard to get what you need to survive. In my opinion, that is where hip-hop is at its best.

Sean Price released his second solo CD, "Jesus Price Superstar", in 2007. While I thought Monkey Barz was better, Jesus Price Superstar was another good album. Again Price showed incredible lyrical power and the ability to command songs. He was also promoting the idea of "grown man rap", which didn't cater to teen or newer trends. Sean Price knew his audience, knew what he liked to do in the booth, and knew the intersection of both.

Despite not being as good as Monkey Barz, Jesus Price Superstar was an important album for a two big reasons: it introduced me to up-and-coming MCs Skyzoo and Chaundon. It also closed with the introspective track "Mess U Made", which became one of my favorite Sean Price songs.

The year after Jesus Price Superstar, Sean Price reunited with Rock in 2009 for the third Heltah Skeltah album, "D.I.R.T: Da Incredible Rap Team". Whereas on the first Heltah Skeltah album I thought Rock was the far better MC, on DIRT, Sean Price's growth as an MC and as a presence made them equal tag team members. They were like The Road Warriors of pro wrestling lore: rough, tough, brawlers who beat up beats with hard rhymes.

After the release of DIRT, Duck Down Records celebrated their 15th anniversary in 2010 with a tour that included a stop in Tampa. I was finally able to see some of their acts live. I wrote about the show here, although back then I was a little harsh on some of the local acts I know more about now.

As mentioned, one of the highlights of the show was seeing Sean Price live.


Sean P killed the crowd despite getting angry at the house sound guy for an annoying feedback that plagued his entire performance.

If you have never seen Sean Price, he is a big dude. As he got angrier and kept trying to spit rhymes about destroying MCs all the while battling an uncontrollable stage malfunction, I began fearing for the sound guy’s life. Remind me never to mess with Sean P.

In the five years since, Sean Price became an even bigger name in the underground hip-hop community. He released "Master P", "Mic Tyson" and "Kimbo Price", and collaborated with Black Milk and Guilty Simpson on the "Random Axe" CD. He also appeared on several collaborations and features. He never seemed to stop writing.

He also never seemed to stopped tweeting. His twitter account @SeanPrice was one of the few music personalities I followed on the platform. He tweeted about boxing, music, and life with his kids. While other artists enjoyed interacting, Sean Price seemed to enjoy blocking people, meaning they would never see any more of his tweets. That's the reason I never tweeted him. I didn't want to be blocked.

But I think the reason I like Sean Price the most was that I felt like I could relate. Sean Price was a grown man, who did grown man rap, who wrote prolifically about nothing and sound like something. He liked wordplay and being a tough guy, but seemed like a family man who just happened to be from the streets. He had fallen off and worked hard to get back. He had a practical, pragmatic view on life with no need for the trendy trappings of celeb life or the rap game (or cookie-scented candles). He hustled. He made good music and he put on a good show.