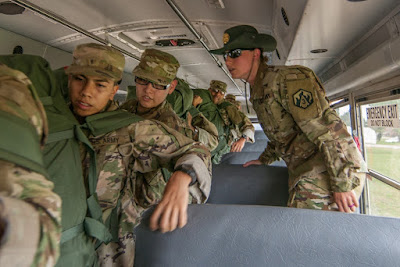 There are several dates each year that cause me to take a moment and reflect. There is my birthday, family birthdays, and the anniversary of family deaths. And one date that marks the beginning of my adult life. The date when who I was changed forever.

If that day was my start date, had I stayed in, I would be retiring from the military today.

I remember it well. Six months after signing the initial paperwork and waiting in the delayed entry program, I left for the Army on the same day my high school peers began life at universities and community colleges. Well, some did. That was part of the reason I enlisted, to get away and do something different. As I mentioned in previous writing, my grades weren't the best, and university life was not only out of financial reach but also out of intellectual reach at that moment in my life. I probably would have slacked through college as I did high school.

So on August 21, 1995, I said good-bye to my mother, visiting grandmother, and brother, and drove with my father to the recruiting office for the last time. I think it meant a lot to my father to see me off as he has always been very pro-military and his father, who had passed away earlier in the year, also served in the Army. I remember my Dad holding back tears as he gave me a hug before he left.

From the recruiting station I was put on a small bus from Melbourne, Florida to Jacksonville with several other recruits. They were on their first of two trips north for processing. I was the only one on my final trip. Their bags were packed for a few days knowing they would return. My one gym bag was packed for good.

When I arrived at the Ramada Inn by the Jacksonville Military Entry Personnel Station (MEPS), I was put in a room with a guy I had never met and never saw again. The only thing I remember about him was that he was a big Grateful Dead fan. He made his fandom known early in our rooming experience when he gave me a speech on the greatness of Jerry Garcia, who had died two weeks earlier. He called the former guitarist a "hero and a great man". He then pulled out several magazines and newspapers from his suitcase and turned to articles on Garcia, as if quote scripture and prove he wasn't alone in his worship.

Looking back, I am not sure what he intended to do with those magazines in basic training. Nor am I sure he passed the necessary drug tests.

That was the only conversation I had with my Deadhead roommate. Shortly after I was given the rundown on Jerry Garcia's prominence, I left for dinner. When I returned, the Garcia acolyte was asleep. Whatever his purpose at MEPS, he was gone before I awoke the next morning and I never saw him again.

After finishing the necessary paperwork and processing, I left MEPS for the Jacksonville airport and the first step of my military journey. From Jacksonville, I flew to Atlanta, then to St Louis, where I finally connected with other new recruits. They were as awestruck as I was.

Shortly after connecting, we were herded into a white school bus headed for Fort Leonard Wood, Missouri. Over the next two hours, I chatted and bonded with the other soon-to-be service members. We were all excited, all young, and all had no clue what was going to happen.

Soon enough, the bus stopped. I didn't own a watch, so I had no idea what time is was. All I knew was that it was late and dark. We all sat in the bus for several moments, anticipating the unknown.

Our unknown was abruptly shattered by the first drill sergeant I ever saw. True to the stereotype, he barked at us to leave the bus and bring our belongings into the Fort Leonard Wood training processing center. As soon as I could, I grabbed my gym bag and hustled off the bus towards the facility.

For the next few days, Army in-processing was a labyrinth of shots, supplies, and adminstrata. I signed up for the GI Bill, was issued my first uniform, and received my first military hair cut. We were herded along by admin specialists and medical personnel who knew more about our futures then we did and liked it that way.

After each day of in-processing, we were led to old World War II-style temporary barracks for the night. It was a typical open bay of bunkbeds and lockers. Privacy was no longer an option. I went to bed almost immediately on that first night, my only post-dinner task securing my new Army gear in my locker. My gym bag, basketball shorts, t-shirts, and sneakers were no longer needed.

I remember being on the top bunk, asking myself on that first night, "what did I get into?". I remember drifting off comparing those first whirlwind moments of basic training to kindergarten or the first day of fifth grade after my family moved to Florida. If I made through those experiences, I thought to myself, I was strong enough to make it through the experience of basic training.

(Seventeen years later in Afghanistan, I used that same technique to get through my first few nights. After a long international flight, several hours of travel and moving, and incredible jet lag, I again laid on a crappy mattress in temporary open bay-style barracks and thought about how I made it though other new and unknown experiences.)

At 5:00 AM the next morning, the drill sergeant turned on the barracks lights and woke us up. He told us to hurry up and because we had work to do. My first day was done. It was August 22, 1995. My second day in the US Army.
Posted by Jordi at 10:21 PM